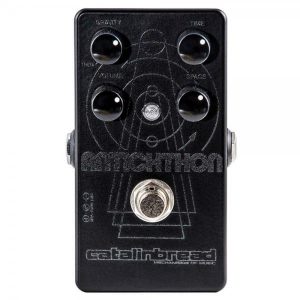 Based on the original Pharaoh, but with even more flexibility. Diode settings include Germanium, Asymmetrical Germanium, Silicon, Mosfet, and LED and Bypass.

The Black Arts Toneworks Pharaoh Supreme has all of the sounds and abilities of the Standard and Primitive Pharaohs. In addition it has some very useful additions and a bit of a twist.

In place of the hi lo switch, the Supreme utilises a variable pre input control because it infinitely adjusts the saturation of the front end of the circuit from 1 to 10.

In Place of the 3 way diode selector, the Supreme utilises a 6 way rotary switch.

Firstly, this selects from the Standard Pharaoh diode settings, and then selects an additional 3 setting not available on the previous Pharaohs.

The standard Pharaoh “just” has Germanium, Silicon and Bypass modes.

The Pre knob control in addition to the Clip knob, produces an array of sounds and textures. These expand the Pharaoh into the ultimate, or Supreme fuzz and distortion that Black Arts has produced.

To show the depth of the new Pharaoh Supreme, a huge 10mm green LED glows with a calm, deep and inviting look into the window of the Supreme soul.