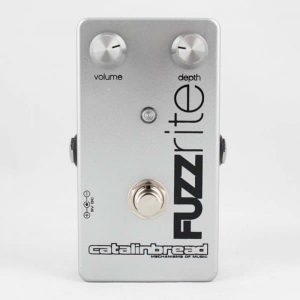 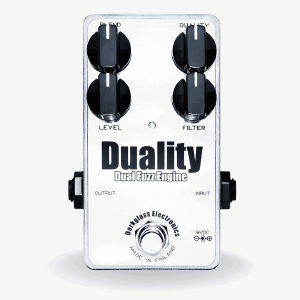 What happens if you take a NOS PNP germanium transistor and an NPN silicon transistor, plus a germanium and silicon diode, and throw them into the alchemist’s pot and stir it up with plenty of Catalinbread sauce? You get a bubbling cauldron of even-order harmonics that will enhance any guitar rig! So, you’re thinking, is it a fuzz? Yes! Is it an overdrive? Yes! Is it a sparkly boost? Yes, again! Karma Suture’s four control layout allows you to dial in a huge range of harmonically rich tones that sound great into clean amps and into overdriven amps. Or into a foundation overdrive, such as the Dirty Little Secret. It can work equally well with vintage single coils and hot humbuckers. Because Karma Suture generates predominantly even-order harmonic distortion, you will notice amazing clarity even with extreme settings. You can even play complex chord voicings and yet every note rings through clear! Try that with your average fuzz or distortion pedal! And even at maximum settings, the Karma Suture retains an open and responsive character unlike a lot of fuzzes and distortion pedals. Even though it has an open character, you can get amazing sustain with the Karma Suture on, especially if you’re hitting a cranked up amp with it. Harmonics come in waves, undulating in and out as you hold that epic power chord. Based on the rare Harmonic Percolator circuit, it is not just a clone. We’ve expanded the potential by adding the exclusive Density and Diodes controls coupled with months of fine-tuning to get everything just right. You’ll find great sounds throughout the rotation of all the controls. No matter how you have the pedal set, the tone and response is always alive, sensitive to your every playing nuance.