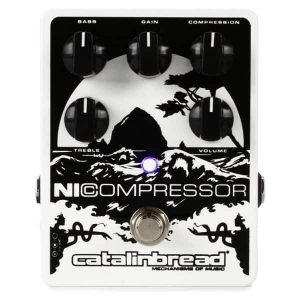 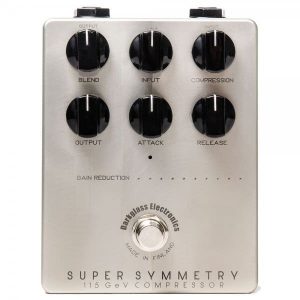 The NICOMPRESSOR (pronounced “Nigh Compressor”) offers distinctive tone shaping capabilities. It achieves exceptional compression dynamics while keeping higher-frequencies intact, making your guitar sound incredibly full and fat, without compromising your tone. In seeking to honor, improve, and expand this concept, Catalinbread developed a broader range of functionality and finely-tuned controls.

The Bass enhances the lower-frequencies and increases sustain when turned up.

The NICOMPRESSOR was the final effect pedal designed by Catalinbread’s founder, Nicholas J. P. Harris.
Nic finished his design in early 2016, shortly before his life was tragically cut short on a road trip to the Oregon coast.
Taking Nic’s breadboarded prototype of the effect to a finished product was a labor oflove. Developing this effect pedal the way Nic originally intended was our highest priority and goal. We dedicated
many hours to this design, revising our prototype while still keeping the effect true to Nic’s original design, concept and inspiration.

To understand what the NICOMPRESSOR is doing with your guitar signal, it helps to know a little bit about how compression works. When your instrument’s signal is quiet, the compressor kicks on an adds a little bit of gain. When your instrument’s signal is loud the compressorattenuates the signal so that the dynamics of your playing becomes more uniform.

In this case, soft notes ring as loud as hard-picked notes, and loud notes are made to be a little quieter. The compressor squishes the envelope of your instrument’s signal so that all notes are roughly set to the same volume, which is really helpful for playing lead runs or switching back and forth from rhythm to lead. Inshort, compression helps to keep the volume of all notes played roughly at the same level.

Not only can compression make the overall dynamics of your playing more uniform, but it can also add sustain.For example if you pick a note or strum a chord, the NICOMPRESSOR will boost the volume as the guitar signal naturally fades out, preventing the sound from fading out quickly and allowing for longer sustained notes.

The NICOMPRESSOR is an “always on” style compression, so find your sweet spot, leave it and ROCK!