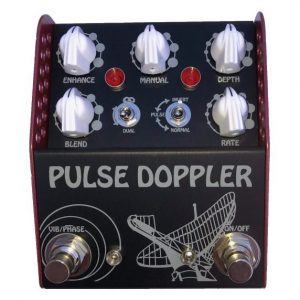 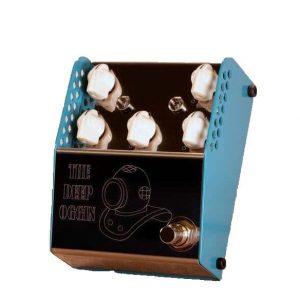 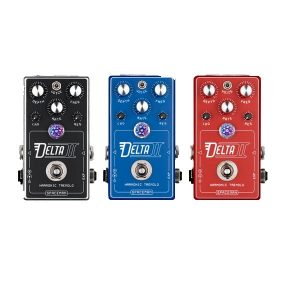 Decade spanning twin-notch phaser, vibrato and tremelo pedal that enables you to sound like as many of the classic records that use the phasing effect as possible.

The ThorpyFx Pulse Doppler receives its name because it simulates the Doppler effect. This accelerates and retard the pitch of your input signal.

It then blends that signal back (or not) with the straight input signal to produce an array of time based modulation effects.

You might think that this is a Doppelganger for a previous classic, yet it’s somehow sound.

The Pulse Doppler was designed from the ground up to be the last word” in analogue Phase Shifter effects pedals.

ThorpyFx and Dan Coggins (former Logy and Dinosaural designer) wanted to deliver a decade spanning twin-notch phaser pedal. Also they wanted one that enables you to sound like as many of the classic records that use the phasing effect as possible.

However, they decided to take it much further and create a dream phaser pedal, whilst retaining a simplicity of use.

This control adds resonance but stops short of oscillation.

When zeroed, there is no regenerative feedback around the four-stage phase shifter (twin notch filter) path.

When advanced in a clockwise direction up towards the extreme, an increasing amount of phase-shifted only output signal is fed back to the phase shifting notch filter path input. This  increases the depth of the two frequency notches.

Also, it alters the harmonic content and the frequencies which are reinforced or cancelled and therefore results in differing audible musical timbres.

This sets the default notch filter frequencies, which are at their lowest at the anticlockwise end and gives higher frequency notches when advanced clockwise.

When the depth control is at zero/fully CCW, the Manual control dominates the set notch frequencies which may be swept by hand, accordingly.

Depending upon the settings of the toggle switches and the other controls, this may be more or less ‘fussy’ in its operating window.

If the sounds seem to disappear, then this MANUAL control is the one to use to intuitively `relocate’ the sound and bring it into the ‘sweet spot’.

The two large RED LED’s indicate the action of each notch filters modulation sweep and provide a ready visual reference and roadmap as to what’s going on regarding the modulation inside the pedal.

This toggle switch allows an inversion of the notches being modulated so that instead of being simultaneous and tandem “in sync” with the ‘Dual’ setting, they move in opposition to one another (i.e. in a bi-directional of “Figure of Eight” motion.

The resulting sound of each mode is distinctly different when compared and each offer different musical possibilities.

The ‘INVERT’ setting inverts the phase shifted signal so that the sounds subtract and have a hollower and somewhat different harmonic content — please note this will be most noticeable when using the Blend control somewhat below maximum.

The ‘PULSE’ setting alters the phase-shifted signal so that it loses low frequencies and acts as a modulated high-pass filter, which can result in disappearing, stuttering and tremolo effects.

Because this setting gives less signal, it can appear to be subjectively quieter depending upon other control settings and the sound is likely to go ‘off the radar’ if the modulation depth is skewed to extremes.

This control sets the balance of dry/straight buffered input signal (fully CCW) to delay-only/wet (fully CW) with all ratios in between available over its rotation.

In the centre the mix of dry to wet signal is approximately 1:1 which produces the deepest ‘notch’.

Fully clockwise will give increasing vibrato/pitch modulation and or pulsing effects, dependent upon the toggle switch settings.

The anticlockwise end will allow for more subtle phasing effects with a less pronounced notch depth.

This control introduces the LFO waveform to the phase shift MANUAL control until it dominates it (almost completely) when set fully clockwise.

It can and should be used in conjunction with the MANUAL control which skews (and fine tunes) the range of LFO sweep applied to it over most of its area, but less so as the DEPTH is advanced.

This control goes from very slow (fully CCW) to very fast (FULLY CW) and everything in between. It determines the free-running LFO frequency which is applied to the manual phase shift with its amplitude fed proportionally from zero to maximum sweep via the DEPTH control setting.

The Left-Hand Footswitch connects or disconnect the straight signal to the output mix, giving a choice of ‘Phase’ or `Vibrato)/Pulse-only sounds. The two output sockets allow for “Wet and Dry” signal path connectivity when the effect is engaged, and both produce a straight bypass signal when the effect is bypassed. The Right-Hand footswitch turns the PULSE DOPPLER on/off (i.e., `Bypass’).