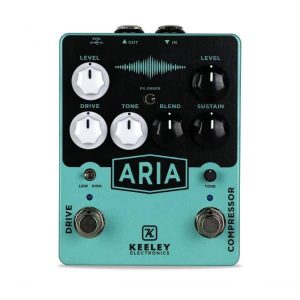 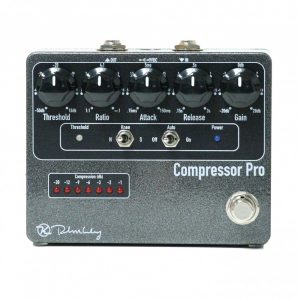 World class super flexible compressor that retains natural guitar dynamics and doesn’t colour the tone. Use it as an effect or an “always on” pedals

What does a compressor do?

Before we go into the details of the Wampler Ego compressor, lets take a look at compressors in the round because they are often misunderstood.

A compressor, in the most straightfor-ward terms, makes loud sounds quieter and quiet sounds louder, “compressing” the signal’s dynamic range.

The loudest part of your instrument’s note is the pluck, strum, or pick. That’s referred to as the “transient” or the “attack” of the note, and it is usually quite percussive. The signal gets really loud for a fraction of a second before the note resonates and fades out. The actual character of the Controlling its level is part of what compressors do, but there’s more.

Raising the Sustain control makes it work harder to make lower volume sounds louder. Raising the Sustain is useful when playing clean. Careful though, compressors don’t the difference between notes and noise, so the more you raise the Sustain, the more noise you can expect. A compressor usually works best early in the signal chain if you’re concerned about noise!

When we designed this pedal, the focus was ensuring the playing dynamics could be retained and that the compressor didn’t color the tone at all. By incorporating a clean blend, it allows your original signal to be blended back in so you can get all the benefits of a great compressor (picking up the notes that aren’t as strong and increasing sustain) but have the option to remove the squash at the front. With this control, you can have full country squash or open studio level parallel compression.

So, with a comprehensive array of controls and a core tone that is pure, you won’t find a compressor that works as perfectly as an “always on” or as “an effect” and is more highly regarded than the Ego Compressor from Wampler Pedals.

Some compressors have a really noticable ‘pop-in’ effect, where they squish the transient and then quickly raise up to the level of the note. That’s because they are reacting to what they see as a HUGE volume jump in the transient. An ‘attack knob’, which adjusts how quickly the compressor responds, offers some control. Slower attack will mean less pop-in, but it also won’t do as much to control the loud transient. Faster attack is great for chick- en-pickin’.

The most flexible compressors are those with a blend control. This allows you to blend in the clean path with the compressed signal. That lets the loud transient through, preserving your playing dynamics, but seamlessly takes over to add sustain and fullness. You can adjust the balance of clean to compressed signal for your needs.

To get the most out of your new pedal, you’ll want to become very familiar with the controls. For the Compressor side of things, it features Volume, Sustain, and Attack controls to dial in your preferred compression behavior, as well as a special Tone control which lets you go from nothing added to lots of sparkle and chime on top of your signal, adjustable to your preference. It also features the fantastic Blend knob, letting you easily adjust the degree of compressed to natural signal. If you’ve never tried a blend compressor before, you’re in for a treat! As with all Wampler Pedals products, the Ego Compressor includes a high-quality true-bypass switch which takes it completely out of the signal path when bypassed. Experiment and enjoy!

A true bypass soft touch relay switching footswitch that completely bypasses the signal when the pedal is off.

This control adjusts the output level of the Ego Compressor. There’s plenty of volume on tap, so whether you want to go farther than your input level or just make sure it can do unity volume.

Sustain controlls how hard the Ego Compressor works to maintain the signal within its compression threshold. Hisher sustain settings will let your notes go on for a very long time, but be careful, because higher sustain settings can also raise the noise floor. If you are running your compressor after overdrive or distortion, you will want to pay close attention to the sustain knobs and maybe back it off a little, otherwise ground noise may become an issue. The Ego is a quiet pedal, by compressor standards, but when the whole point of a pedal is to take a signal, even it out, and make the quiet parts louder and loud parts quieter, you can expect added noise as part of the process.

Attack controls how quickly the compression action start to take effect. At slower attack settings, it will more gradually begin to compress the signal, which can leave your early note less affected. With quicker attack settings, it gets a noticeable pop-in, because it clamps down on the high signal level if the initial note and then quickly raises the output level after that to begin its compression action. This is integral to the classic country chickin’ pickin’ sound. Dialing this control in is all about feel, and where your ideal setting ends up will be entirely based on what you need the compressor to do for your sound.

Not content to merely have a great sounding compressor, Brian has created what we feel is a virtually ideal Tone knob for use with comrpessors. At fully counter-clockwise, it doesn’t have any impact on the signal at all. As you raise it clockwise, it adds extra sparkle and presence to the sound, and with the right gear it can be very ‘jangly’, a characterostic that a lot of players in Nashville especially look for.

At 50/50, you clean signal naturally fades, the Ego Compressor’s compressed signal seamlessly fills in the gaps. This is a process no ear will hear because it’s perfectly even and smooth, and the end result is all the benefits of a great compressor but a real authentic transient. Counterclockwise, you get less and less compres- sor and more clean. Clockwise, is more and more compression. Finding the balance is the key to this effect.

The Ego Compressor has become a modern classic and has become the first choice for musicians of every genres, all over the world. It doesn’t matter if you need full country squish, a tone fattener, something to level out the dynamics or just a completely transparent boost, the Ego will suit you perfectly. It’s the kind of compressor you don’t realize is on until your tone disappears when it’s turned off.

See it in use.

With the Ego Compressor but you have ALL the control you need. Attack, Release, Tone, Volume and the all important Blend control, you can tailor the Ego Compressor to slot perfectly in to your rig. From full country squish, to punchy dynamics, everything you need is right there.

Its not just for country

Although compression is loved by country players, so many other players are using it to apply fatness and control to their tone… The Ego Compressor allows you to retain your tone, retain your dynamics, but still give you the benefits. Have a look at the pro players boards, you’ll find compression, it’s what makes them sound so awesome.

Brian Wampler’s attention to detail and commitment to bringing you the best-sounding & most usable Effects Boxes on the market is nothing new. Those qualities are on full display within the Ego Compressor. We’re all tone-freaks, and we’re always trying new things, but we hope this pedal finds it’s forever home on your pedalboard, so we built it to last that long.