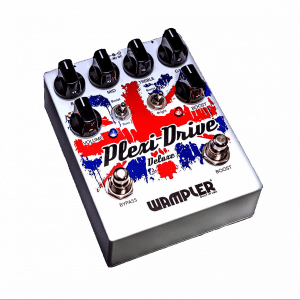 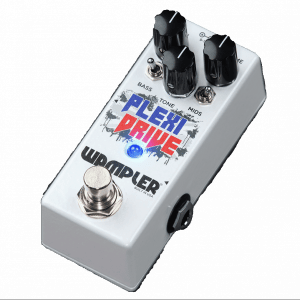 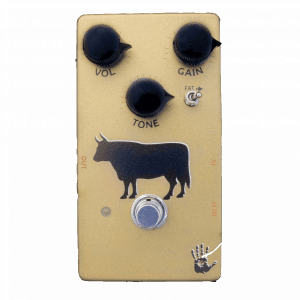 This is the Plexi Drive pedal with an additional “tube screamer” style gain stage in front. British valve and overdrive – the sound of rock and roll!

Based on the classic Wampler Pedal “Plexi-Drive”, the Plexi-Drive Deluxe builds on the foundation of the original. It gives you considerably more control to shape your tone.

With a 3 band active EQ and additional brightness control, the Plexi-Drive Deluxe takes a huge step forward into the modern era of pedals.

Complete with the perfectly voiced pregain booster, you can achieve almost any Plexi tone from virtually any amp.

Since the early 60’s, Marshall Amplifiers® have lead the way in rock tones. Legendary tight overdrive and coveted bass response.

Early rock legends such as: Jimi Hendrix, Led Zeppelin, Cream, and AC/DC helped lead the way in creating some of the most iconic rock tones ever produced. It was this that  catapulted Marshall® into rock legendary status.

Like the original, the Plexi-Drive Deluxe’s unique gain structure can cover everything from Vintage ’68 style Plexi tones to the all out massive rock tones of a JTM-45® cranked to ten, or even eleven.

With the addition of an all-new active 3 band Bass/Mids/Treble EQ stack – you can now have even more tonal control.

With the bass boost option, you can emulate the feeling of the low-end thump of a 4×12” cabinet (or two).

At the flick of a switch and can allow you to dial in your low end at lower volume gigs or at bedroom volume levels.

To compliment this, we also added a bright switch to add high end sparkle . This makes changing from bright to dark guitars (and amps) a breeze.

The Plexi-Drive Deluxe also features a one knob, pre-gain boost soft click switch that is voiced like “that ‘valve’ screaming green overdrive with pronounced mids” (it’s a tube screamer!).

This will to help push your leads into thick creamy overdrive.

The Plexi-Drive Deluxe will fill your Marshall sound void and give you the crunch, response, boost and feeling that your rig begs for.

Whether you are playing sold out shows or rocking out by yourself, the Plexi-Drive Deluxe will take your tone and allow you to create your own flavor of rock!

Your search for the perfect versatile M.I.A.B. (Marshall® in a Box) can finally be over.

To get the most out of your new pedal, you’ll want to become very familiar with the controls.

The Plexi-Drive Deluxe has a straightforward control scheme. It  doesn’t take a great deal of time to understand, but there are some subtleties to how it works its magic that should be explained.

There is a volume (level), main gain (post gain), 3 band EQ and boost (pre gain) . Together with the two switches (bass boost and bright boost) you can get almost any Marshall® tone through your rig!

It is worth spending a little time playing with how the EQ reacts to differing gain levels as well as what effect the switches have. It’s all good fun!

This control adjusts the output level of the Plexi-Drive Deluxe.

Adjusts the amount of bass applied to the effected signal.

If you are using a Stratocaster® style, single coil guitar rather than a humbucker loaded instrument, you may need more bass to “fatten” up the tone.

When in the fully counterclockwise position, the tone will be much thinner and brighter. When fully clockwise it will be fuller, darker and heavier around the low end.

Works in the same way as the bass and mids knob, but controls the amount of treble on the effected signal.

Again, fully counterclockwise the treble is reduced considerably and clockwise brings it forward.

This switch offers an added level of control over the lower frequencies of the pedal by allowing you to kick in a niece low end “thump”.

Great for fattening up single coils, making small cabinets sound big, or getting the most from the higher tone knob setting.

Opposite of the bass boost switch is the bright boost switch. This switch will allow you to add higher frequencies “brighten up” otherwise seemingly dark pickups or amps.

Post gain knob: This knob saturates the circuit with a lovely warm overdrive designed to give you those famous powerfull tones that you love.

This knob will allow you to dial in that famous “mid-range” overdrive boost to hit the front end of the main gain channel. (Note – 3 band EQ will not effect the boost channel)

This bypass switch is used to engage the main Plexi-drive gain stage of the pedal.

We use a true-bypass relay because it utilizes a quieter and smoother switch that is more reliable than traditional bypass switches.

Your original tone/signal will remain unaffected when the pedal is not engaged.

This bypass switch will allow you to engage that famous “mid-range” overdrive boost to hit the front end of the main gain channel.

We use a true-bypass relay because it utilizes a quieter and smoother switch. It is also more reliable than traditional bypass switches.

Your original tone/signal will remain unaffected when the pedal is not engaged.