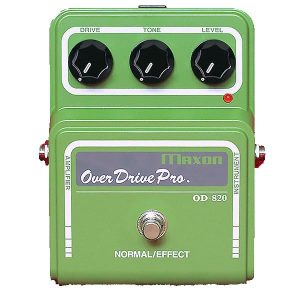 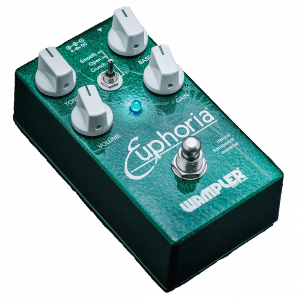 Influenced strongly by the classic Klon Centaur, this amazing boost and overdrive gives the clarity and transparency associate with the original.

With the Wampler Tumnus Deluxe, Brian has set a new standard.

Thanks in large part to the design’s articulate-sounding buffer, all of the clarity, punch, and detailed breakup of the original Tumnus are still there.

But if you prefer the sound of true bypass performance, just hit the switch on the side of the pedal for uncolored tonal purity.

Brian also injected the Tumnus Deluxe with a level of tonal flexibility not previously available on this style of drive.

Active bass and mid controls, as well as a regular treble control (the same as the pedal it was inspired by), encourages you to sculpt the tone from this pedal to the demands of your rig.

Whether you’re boosting a driven amp or another pedal, using the pedal as a stand-alone overdrive, or crowning it your “always on” tonal sweetener, you’ll find the Tumnus Deluxe’s wide-ranging controls make it much more than just another clone.

The Tumnus Deluxe delivers all the string-to-string clarity, high-headroom output, and amp-like breakup that made this style of overdrive pedal so iconic.

But its 3-band EQ will enhance your tone with warm low end, instantly identifiable midrange, and just the right amount of top-end sparkle.

Unlike some other similarly voiced pedals, the Tumnus Deluxe has enough tonal control to perfect your sound through any rig.

The buffer inside the Tumnus Deluxe sounds so good, you might just find it enhances your tone whether the pedal is on or off. But Wampler knows that some players prefer the clean signal path of true bypass operation.

With the Tumnus Deluxe’s side-mounted buffered/true bypass control, attaining that uncolored sound is as easy as flipping a switch.

There is a reason this circuit has gained the reputation it has – it provides the perfect high headroom overdrive to send your tone into the place you’ve always dreamed it would go. It will bring out the harmonics you didn’t know where there, it will bring out the sustain you never thought possible and most importantly, it just makes EVERYTHING sound better.

You can see a video of the Tumnus here.

It doesn’t matter if you want to fatten up your pedals, push your amp or just need a beautifully organic overdrive – the Tumnus Deluxe delivers.

Not just another clone

Taking the legendary response and dynamics of the Tumnus, we added not only an active bass and mid control, but the option to have the famous buffer of the original, but also True Bypass…a hot switch gives you extra gain at higher levels, making the Tumnus Deluxe the most versatile and powerful pedal in its class.

Brian Wampler’s attention to detail and commitment to bringing you the best-sounding & most usable Effects Boxes on the market is nothing new.

Those qualities are on full display within the Tumnus Deluxe. We’re all tone-freaks, and we’re always trying new things, but we hope this pedal finds it’s forever home on your pedalboard, so we built it to last that long.

The Klon Centaur’s influence on the Tumnus Deluxe

I’m guessing you’ve seen the prices of some of the vintage effect pedals on eBay these days? Certain pedals are literally going for several thousand dollars – why?

Well, because they sound AMAZING and they have a myth and a legend attached to them – which of course it helped all the more by a healthy amount of PCB goop and them not being made like that anymore…

There have been many clones of the most popular, many that claim to bring you the original parts used in the original way, recreating something magical, even going so far as recreating outer paint color to distinguish models.

Here’s the thing, we ALL know that each of these pedals were different, it had nothing to do with the paint or any myseterious secret part change, it had everything to do with what the designer felt worked best at that moment in time, for that pedal.

The Tumnus uses the best of the original designs

We decided that enough was enough, we got frustrated with people charging hundreds of dollars for a copy that claimed to contain the magic fairy unicorn dust NOS parts, and decided it was time to put this to rest!

Brian took several of the original and designed the Tumnus to sound like the best bits of all of them, make the ultimate tribute to that circuit – and make it with modern high quality parts so each sounds as amazing as the next!

With the original Tumnus appearing only in a mini format, people were shouting for a full sized version – So, Brian being Brian, decided he wouldn’t just put it in a bigger box, he wanted more gain, he wanted the option of true bypass or buffered and, of course, a full 3 band EQ. The Tumnus Deluxe was born…

Whether you want to use this pedal as an OD or a boost, you can be sure that all of the low end is present, and beautifully warm, the mid hump is placed perfectly and the gain itself is to on point you will finally understand what all the hype has been all about. With that as your foundation, you can now have THAT tone, but with total con- trol… sounds like heaven in a box!

In order to get the best out of your new pedal, we recommend you spend some time getting to know the controls as well as understand how they all work together. This kind of circuit is the most responsive around. Try it as a boost with te gain down or turn up the gain to find the overdrive. It just makes everything sound better.

As you have come to expect from Wampler, the bypass switch is a relay based soft switch, this ensures the pedal will be the most hardwearing it possibly can be! There is a switch on the side, labelled ‘buffer’, when pushed in the pedal is ‘buffered bypass’ and when out, it’s fully ‘true bypassing’. The buffer in the Tumnus is outstanding, so the choice is yours which way you want to play it!

Quite self explanitory! This adds grit and dirt to the effected signal. Start with it all the way off (counter clockwise) and up the volume from unity and you have an amazing boost, it will fatten up your tone

You’ll find that the HOT switch only really kicks in when you have the gain up high, so, if it’s not making much difference at lower gain, crank it!

In true Wampler style, Brian added a much more comprehensive EQ stack to the deluxe.