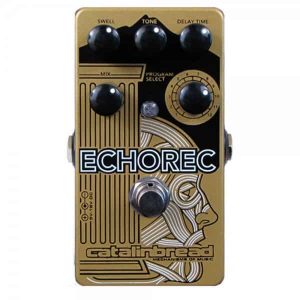 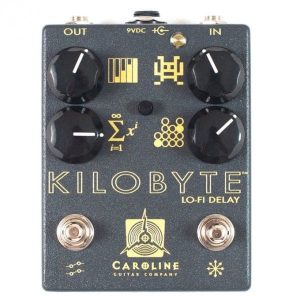 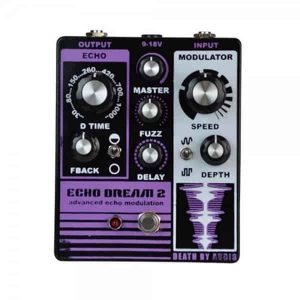 Based on Binson echo made famous by Pink Floyd’s. 40ms-1000ms of   anything from single repeat to “spaceship feedback

The Catalinbread Echorec is based around the legendary Binson Echorec. This is an arcane tube echo which incorporates 4 playback heads and a spinning magnetic drum as its recording medium.

The Binson is probably most famously known for Pink Floyd’s use of the unit. It has long captivated musicians for both its rhythmic and ambient characteristics.

We managed to include all the features of the original (and then some) while still keeping it in a small standard pedal sized enclosure.

The Catalinbread Echorec has 12 programs which allow for all combinations of the 4 delay heads, something which the original was never capable.

The original also has a fixed speed, and thus a fixed delay time, while the Catalinbread Echorec  goes from 40ms-1000ms.

Repeats give you the ability for a single repeat or can go into spaceship feedback.

The tone control is very useful, because it can be tonally flat or dark and resonant on one side, or bright and bubbly on the other. The mix allows for 100% wet or dry signal.

Inside the pedal you have the ability to run in true-bypass or trails mode, as well as a trimmer for gain and modulation.

Taking all the goodness of that huge Binson Echorec, and squeezing it down into a standard sized stompbox without losing anything.

We did we not want to lose any of its qualities because it is such a compelling musical device.  Actually we extended its capabilities beyond the original and provided  variable delay time!

“What if we had the same four playback head concept but could stretch the delay time out beyond the 300ms limitation?

Then the rhythmic patterns suggested by the various combinations of those four playback heads could really come to life!”

Since most of the Binson’s settings were basically within the “slapback echo” delay time range, you couldn’t really play off of the syncopations suggested by the head combinations.

And it turns out the one example that we all know of that IS syncopated. Namely the bass part on Pink Floyd’s “One Of These Days” uses a single-tap setting – just head 4, which is 300ms, with a few repeats.

So really, you could play that part with any old delay pedal.

We felt there was something lurking in the Binson concept that hadn’t been realized yet.

This could be unlocked by allowing longer delay times while still maintaining the equidistance between the four playback heads.

For example, if we selected for playback, head 1,3,4 then the rhythm becomes: P 1 x 3 4, where P is your initial picking and x is head 2 turned off.

The “x” becomes the rest note in the rhythm. This is hard to explain in writing but you hear it right away!

And we wanted a more musically useful tone control, so we came up with a “tilt” style tone control.

Centring around noon, it allows you to get warmer and deeper or brighter and thinner.

Providing an audio path that was as musically compelling as the tube audio path in the Binson is important.  What the Binson does for your overall guitar tone and response is as important as the fact that it is an echo device.

We came up with a preamp circuit that utilizes two silicon transistors specifically tuned for huge clean headroom and maximum touch sensitivity.

Not wanting to go with the normal audio driver circuits commonly found in delay pedals. They get the job done but they literally constrict your guitar signal and take away your playing dynamics; playing soft or playing hard results in the same response – flat.

Our circuit actually ENHANCES the touch sensitivity of your amp. You’ll find that you’ll be able to go from whisper soft to full-on hard and loud attack just from varying your picking strength with the Catalinbread Echorec between your guitar and amp.

The SWELL knob is essentially the feedback control of the delay. When this control is fully counter-clockwise you will get one repeat (well, 1-4 repeats depending on which playback heads are active.)

As you raise the control you’ll get more repeats, giving you that famous Echorec swirl. The repeats float off over the horizon rather than falling off into distorted echoes.

Towards the end of the sweep the Echorec will begin to self-oscillate for spaceship sounds and runaway feedback.

Somewhere between 1:00 and 3:00 and you can get a beautiful ambient pad that doesn’t take off in oscillation and doesn’t completely fade out. The SWELL control regenerates the sum of all the heads being used (set by the Program Select knob) to create its complex swirl of repeats. It’s intoxicating!

The TONE knob controls the timbre of the echo repeats.

It is a tilt style tone control. Around 12 o’clock you’ll get a relatively flat, neutral EQ. Turning the knob counter-clockwise will give you darker, thicker repeats, from a mild burnishing, or all the way to deep, murky repeats.

Clockwise will result in brighter, thinner repeats making it especially good to bring out the attack on rhythmic repeats or to just add a shimmer without muddying up the fundamental note of your playing.

The TONE control can be a lot of fun when the Echorec is self-oscillating. Turning it counter-clockwise the repeats will slowly bubble to the surface, like a behemoth rising from the deep. Clockwise will bring out a siren-like effect when you adjust the delay time as well.

The original Echorec had a maximum delay time of 300ms whereas delay time on the Catalinbread goes from about 40ms -1000ms. One cool thing is you can twist the Delay Time knob in real-time to get speeding-up / slowing-down, spaceship warp landing sounds!

A lot of modern delay pedals don’t do that because they just stop echoing while you’re turning the knob. What fun is that?

The MIX control allows you to run the Echorec completely dry (very useful as a bonus boost when run in TRUE BYPASS). Alternatively 100% wet, which works great in stereo or multiple amp setups and anything in between.

Please note that the Mix control is still active when the pedal is bypassed if the internal switch is set to “buffer”. There will be no new wet signal present if you turned the mix to full clockwise.

If you have a nice long self-oscillation trail going it will keep going when you hit the bypass footswitch!

If the internal switch is set to “true bypass” then the Mix knob will have no effect when the pedal is bypassed.

The Mix control is a passive design that was chosen because it had the least amount of impact on the playing dynamics of the pedal, something that was critical to us.

We wanted nothing to get in the way of the touch-sensitive responsiveness of our pre-amp stage. This mix design gave us the blend we wanted between the dry and wet signals. Important to sound cohesive together and not separate and disconnected.

Also, we wanted to have the capability to go full-wet as there are times when full-wet is needed, as noted above, for stereo or wet/dry amp rigs.

Because of this, you may notice that the dry signal seems to get a bit quieter as you turn the mix up from the full counter-clockwise dry signal only setting.

That is because it is a true Mix control, blending the two signals in proportion to where the knob is set.

A more commonly used mix method is to always have full-dry and then blend in the amount of wet signal.  This keeps the dry signal constant but at the expense of having wet-only and, more importantly, at the expense of the playing feel.

The original Echorec had a 12 position switch which controlled the various playback head configurations.

Since the original was mechanical with the disc only able to go one speed, not all combinations were available for use.

The Catalinbread Echorec changes all that because with the ability to vary the delay time on the single playback head.

We were able to include all combinations, which include rhythmic patterns not available before. Programs 7, 10, & 11 are these programs.

Based on the legendary Binson Echorec.