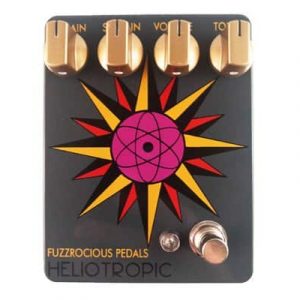 Baby brother of the classic Ego compressor pedal, the Mini Ego gives you a similar experience in a small  footprint

The Wampler Mini Ego is based on the incredible success of the original Ego.

Featuring switches for tone (dark and bright) and attack (slow and fast), you can tweak your tone to a standard of a pedal twice its size.

The Ego let you blend in your original signal together with the compressed sound.

So you can get all the benefits of a great compressor, picking up the notes that aren’t as strong and increasing sustain.

But, you have the option to remove the squash at the front by bringing the bypassed signal in.

With this control, you can have full country squash or open studio level parallel compression. Basically, the Mini Ego gives you complete control of every aspect of your compression.

So, with a comprehensive array of controls and a core tone that is pure, the Mini Ego works perfectly as an “always on” or as “an effect”.

It may be tiny, but you have ALL the control you need.

Attack, Release, Tone, Volume and the all important Blend control, you can tailor the Mini Ego to slot perfectly in to your rig. From full country squish, to punchy dynamics, everything you need is right there.

A true-bypass switching footswitch that completely bypasses the signal when the pedal is off.

This control adjusts the output level of the Mini Ego Compressor.

There’s plenty of volume on tap.  So whether you want to go farther than your input level or just make sure it can do unity volume (the same level of signal going out as you feed it, when active), you’re covered.

The Sustain and Blend controls will have an effect on the total output volume, so you’re probably better off waiting to adjust the Volume until you’ve dialed in the other controls.

Re-adjustment might be necessary if you get it to the desired level and still need to tweak the sound.

Sustain controls how hard the Ego Compressor works to maintain the signal within its compression threshold.

If you are running your compressor after overdrive or distortion, back off the sustain so as not to raise the amount of noise to unbearable levels.

The Ego Compressor is quiet, by compressor standards.  But when the whole point of a pedal is to take a signal, even it out, and make the quiet parts louder and the loud parts quieter, you can expect added noise as part of the process.

At the slower attack settings, it will more gradually begin to compress the signal, which can leave your early note less affected.

With the quicker attack setting, it gets a noticeable pop-in, because it clamps down on the high signal level of the initial note and then quickly raises the output level after that to begin its compression action. This is integral to the classic country chickin’ pickin’ sound.

Quite a simple one this, to the left the control is darker and to the right it’s brighter. There is no hard and fast rule with this, it all depends on your guitar and your amp.

Having established that the Ego Compressor has everything you need to dial in a fantastic sounding compressed signal, now it’s time to learn about the Blend functionality.

At about noon on the Blend knob, the compressed signal and the (enhanced, boosted, and slightly warmed) clean signal are even in level.

Because the signals are in parallel inside the pedal before mixing down to mono at the output, the Blend control acts as a mixer knob.

This is a process no ear will hear because it’s perfectly even and smooth, and the end result is all the benefits of a great compressor but a real, authentic transient.

Counterclockwise, you get less and less Ego Compressor and more and more clean signal.

Clockwise, more and more Ego Compressor and less and less clean signal. It’s not too hard to grasp, but it is the sort of thing that rewards careful experimentation to see what all it can do before you settle in on what it is specifically that you want to do.